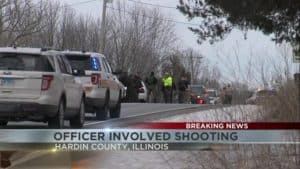 Illinois State Police is investigating an officer-involved shooting that left the suspect wounded.

Troopers say early findings in the case show that the incident started on Saturday, February 20, 2021.

A Pope County deputy responded to the scene of a possible burglary in the 900 block of Illinois Route 43 in Herod around 10:12 p.m.

As the suspect ran away from the crime scene, he was alleged to have stolen the deputy’s vehicle, an unmarked squad car.

The next day around 10:30 in the morning, deputies from the Hardin and Pope County Sheriff’s Department found the squad car. It had been abandoned on Illinois Route 34 at the north edge of Eichorn.

They also found the suspect about 50 yards from the vehicle and attempted to take him into custody.

However, after a brief encounter, the deputies fired their duty weapons at the suspect, who was shot.

The suspect was flown directly from the scene to an area hospital with non-life-threatening injuries.

No officers or bystanders were injured during this incident which remains under active investigation.

At this time, the name of the subject is not being released, pending further
investigation and potential charges.

Once completed, the ISP DCI – Zone 7’s officer involved shooting investigation will be turned over to the Hardin and Pope County State’s Attorney’s Offices for review.

ISP DCI Zone 7 is leading this open and on-going investigation with the assistance of Hardin and Pope County Sheriff’s Departments.