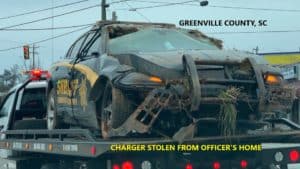 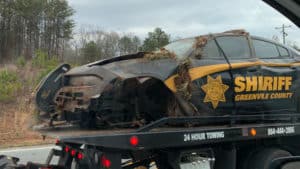 A Greenville County deputy’s patrol car was stolen from their home and crashed a short time later in Pickens County, the sheriff’s office said.

According to the Greenville County Sheriff’s Office, dispatch was called just before 9:00am for one of their patrol cars driving erratically on Highway 124.

The sheriff’s office said that a deputy’s patrol car was stolen from their home in Pickens County and a suspect is in custody.

According to Highway Patrol, the patrol car struck an embankment near Old Mill Road and overturned.

The driver, who has not yet been identified, was charged with DUI. There’s no word yet on any charges related to the vehicle theft.