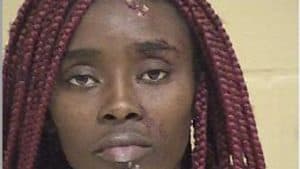 A Shreveport woman was arrested Sunday night after allegedly causing a disturbance and stealing a marked SPD police car.

On Sunday, just before 10 p.m., Shreveport police responded to the intersection of Mertis Street and Greenwood Road relative to a disorderly female. Officers contacted N’Shayla Clay at this location.

When officers attempted to detain Clay, police said she physically resisted and was able to enter into the passenger side of a patrol car. Once inside, Clay attempted to drive away in the officer’s patrol car striking both another officer and a separate marked unit.

Clay was apprehended a short distance from this location and was detained by officers following a brief struggle to remove her from the marked unit. The officer was treated for a minor injury. He transported to Ochsner LSU Health and later released.