12/23/21 Quincy, IL – Stolen Vehicle Driving Wrong Direction Struck 2 Cars – Suspect Got Out And Stole A Squad Car While Officer Was Helping On Scene – Squad Car Abandoned – Police Arrested Suspect On A Warrant After She Locked Herself In House 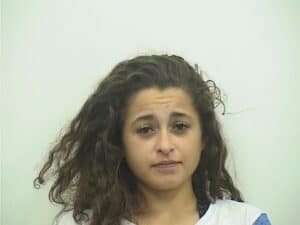 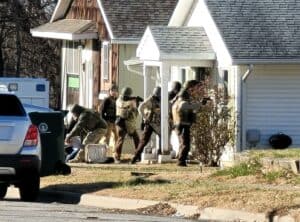 A Quincy woman involved in a high-speed chase that included a stolen Quincy Police squad car was arrested Wednesday afternoon after a nearly four-hour standoff with law enforcement.

The Adams County Sheriff’s Department received a report around 3:40 a.m. Wednesday of three trucks that were stolen in the 2000 block of Ill. 61 in Houston Township. Around 7 a.m., deputies located one of the stolen trucks abandoned in Camp Point. While investigating the abandoned truck, deputies received a new report of a Hyundai stolen from a residence in Camp Point.

Deputies located the the Hyundai around 8:30 a.m. heading east on Ill. 61 near Ill. 336. The Sheriff’s Department attempted to stop the car, but the Hyundai reportedly fled from the stop at high speed. Deputies maintained visual contact with the car and contacted the Quincy Police Department as it neared the city limits.

The Hyundai was seen heading west across the Bayview Bridge. Missouri law enforcement was notified and found the vehicle in West Quincy, where it fled again and returned across the river into Quincy.

At about 9:30 a.m., Quincy Police Chief Rob Copley said an officer saw the vehicle, which was reportedly driven by Mercedes N. Patterson, driving the wrong direction on North Third before turning east on Broadway and heading north on Fourth.

As the officer rounded the corner, they discovered that the vehicle struck two parked cars. When the officer left the squad car to help protect everyone at the scene, Copley said Patterson entered the vehicle through the passenger door and took off at a high rate of speed.

“When we located it, it was in a backyard and was abandoned and had struck a garage and a tree,” Copley said.

Because of how quickly events unfolded, Copley said he didn’t think the officer driving the stolen squad car did anything wrong. However, police will be reviewing body cam footage of the incident.

A neighbor said he heard the squad car crash around 9:30 a.m. his relative’s house in the 300 block of Maple at about 9:30 a.m. The driver reportedly ran to Second and Maple.

At around 10:15 a.m., Adams County Sheriff’s vehicles blocked off Maple at Third Street.

Deputies ordered the occupants of 209 Maple to exit the home and said a search warrant for the residence was on the way.

At 10:40 a.m., deputies announced over a megaphone that the resident’s parole would be violated if they did not exit the house.

An elderly woman who arrived at the scene around 1 p.m. asked whoever was inside the home to come out.

Patterson and two other people were removed from the home after law enforcement made entry.

The Sheriff’s Department said Patterson faces charges of burglary to a motor vehicle, aggravated fleeing or attempt to elude a peace officer and theft over $10,000 under $100,000. She also was arrested on an Illinois Department of Corrections parole warrant.

Patterson is being held in the Adams County Jail without bond, and additional charges and arrests are pending.

The Sheriff’s Department and QPD were assisted by the Adams County Ambulance service as well as numerous tips and information from the community.