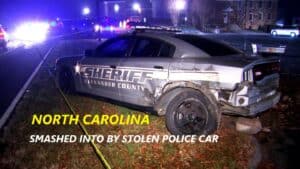 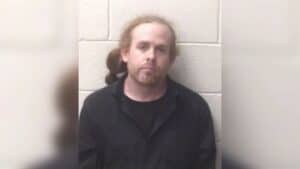 A man is behind bars after a deputy was hurt early Friday when his cruiser was hit by a stolen patrol car following a pursuit in Alexander County, officials said.

It all started when a deputy saw a Ford Explorer speeding south of Taylorsville. The SUV ran a stop sign and continued west on N.C. Highway 90, officials said.

The Ford drove over stop sticks that a deputy placed at Antioch Church Road and Highway 127, flattening the SUV’s tires.

The driver, who police identified as 35-year-old Tony Timothy Martin, of Taylorsville, got out of the SUV and “came toward the deputy in a very aggressive manner,” the sheriff’s office said.

Martin did not comply with the deputy’s orders to stop and was able to get into the deputy’s patrol car and sped off in it.

The deputy then fired at his cruiser “in an attempt to stop the threat created by the suspect having access to county-issued weapons inside the vehicle,” the sheriff’s office said.

Martin fled in the car with deputies in pursuit.

He drove into the parking lot of Antioch Baptist Church and back out onto the roadway, traveling east on Antioch Church Road. Officials said Martin drove into the westbound lane and rammed into a deputy’s vehicle.

Both cars were disabled from the impact and Martin then got out of the stolen police car. Deputies tried to use a Taser on Martin after he didn’t comply with orders, the sheriff’s office said, but his thick overcoat prevented the Taser from working.

Because the deputy didn’t spot a weapon, he didn’t fire his gun at Martin, according to the sheriff.

“That’s why the deputy was trying a distance between him and the suspect until back up arrived — so he wouldn’t have to use excessive force,” said Sheriff Chris Bowman.

Martin then ran through the graveyard of Antioch Baptist Church with police chasing after him. The deputy involved in the collision had collapsed due to a head injury and some officers rushed to help him while others continued to chase Martin, who was captured a short distance away.

The injured deputy was taken to a local hospital in Catawba County to be treated and was released later Friday morning.

Radio traffic painted a chaotic picture of what deputies were dealing with after the suspect’s tires were flattened with the stop sticks.

“Shots fired,” a deputy could be heard saying.

“10-4, county copy direct for all units, subject stole a patrol car,” a dispatcher then says.

“If individuals would just do what they’re asked to do at the time they are stopped, a lot of this could be stopped,” said the sheriff. “Putting officers’ lives in danger, suspect’s life in danger, and citizens.”

Martin was charged with:

The SBI was helping with the investigation.