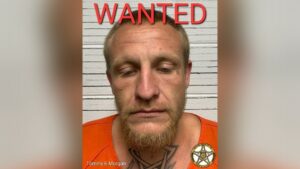 A Georgia man who was under arrest and in handcuffs stole a patrol car and evaded deputies, according to officials.

Tommy Morgan, 32, stole a Dade County Patrol Car on Friday and is now wanted for Escape, Motor-Vehicle Theft and Interference with Government Property, all of which are felony charges.

The Dade County Sheriff’s Office is searching for Morgan and asked the public for any tips to help track down the suspect.

According to the sheriff’s office, the deputy was outside his patrol vehicle when Morgan, who initially had his hands cuffed behind his back, somehow moved his hands in front of him and forced his way through the partition inside the car.

Morgan struck another patrol car with the vehicle as he was driving away.

Deputies then lost sight of the fleeing patrol car before they were able to pursue it. However, the deputies found the vehicle abandoned in a ditch about a mile from the location of the theft.

They tracked Morgan for a few miles with K9 assistance but were unsuccessful in their efforts to locate him.