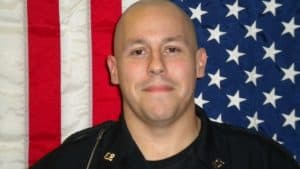 A Forest Park police officer remains hospitalized after being struck by a patrol car that was stolen by a naked woman two weeks ago, authorities said.

The incident occurred about 9:20 p.m. Nov. 28 after police responded to a call about an intoxicated person in the 4800 block of North Lake Drive, Forest Park police Sgt. Alyssa Zackery said in a news release.

Officers arrived to find the naked woman trying to get inside a home she didn’t live at, according to police. The woman, identified as 23-year-old Alyssa Caballero, was detained at the scene and placed in the backseat of a patrol vehicle “because she was cold and for her safety,” Zackery said.

She ended up stealing the police car and intentionally striking Officer C. Sloan as she drove away, authorities said.

“Caballero continued to drive recklessly onto Main Street where she damaged property along the way,” police said, adding she was eventually stopped and taken into custody a second time.

Sloan was treated by firefighters at the scene and taken to a hospital, where he remained Thursday afternoon. He underwent one surgery on his leg and has another scheduled, but he is “in good spirits and is recovering well,” police said in the release.

Caballero faces a dozen charges in connection with the incident, including two counts of aggravated assault, serious injury by vehicle, hit-and-run, theft by taking a motorvehicle, fleeing from police, interference with government property and several traffic violations, records show. She remains held at the Clayton County Jail without bond.