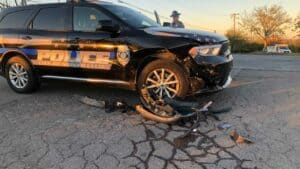 LEXINGTON, Ky. (LEX 18) — One man is in custody after Kentucky State Police say he stole a cruiser and, after leading police on an 18-mile pursuit, hit a second KSP cruiser.

KSP says the Monticello PD SUV was stolen earlier in the day. According to KSP, the suspect was heading north on I-75 in Madison County when troopers first tried to pull over the driver around 4:00 Saturday afternoon.

The suspect’s name has not been released and we are not aware of any charges at this time.

Sgt. Purdy says nobody was injured in the incident and calls the conclusion a “best-case scenario.”