11/4/21 Daytona Beach, FL – Man Posing As DEA Agent With Police Hat Points Toy Gun And Laser At Police Officers – This Was An Attempt To Steal A Police Cruiser – Man Taken Down After Clicking The Toy Gun Several Times – Arrested 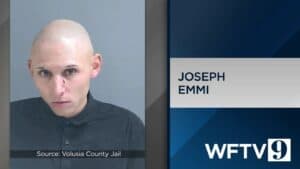 A Daytona Beach man is in jail, accused of posing as a DEA agent and using a toy gun with a laser pointer in an apparent attempt to steal a police cruiser.

According to police, two Daytona Beach officers in full uniform were sitting in the parking lot of the Beachside Precinct when a man, later identified as 26-year-old Joseph Emmi, approached the officers’ car wearing a black hat with “POLICE” sewn on the front in green.

Police say Emmi claimed to be a DEA officer and asked which of the patrol vehicles weren’t being used.

When asked what he meant, one officer said Emmi simply replied “I need one,” before rapidly approaching the officers’ vehicle and “violently” pulling on the door in an attempt to enter.

The officers say Emmi then pointed what appeared to be a gun at one officer while pointing a laser beam at the other. One officer noted that the recent rise in the use of 3d-printed firearms raised the concern that the weapon did have the ability to fire actual projectiles that could cause serious harm or death.

According to Emmi’s arrest report, one officer chose to charge him at the point, under the assumption that pulling his own firearm might prompt Emmi to shoot. As the officer charged, Emmi pulled the trigger four times, but the gun only clicked.

Emmi was eventually taken to the ground while continuing to yell that he was a DEA agent, according to the report.

He was arrested and faces a list of charges that includes aggravated assault on law enforcement, impersonating an officer during the commission of a felony, and shining a laser light at law enforcement officers.