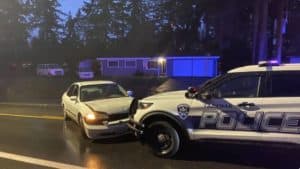 A suspected car thief was arrested early Monday after stealing a Tacoma police patrol car and crashing it near Kent, police said.

Officers were called about 5:30 a.m. to an apartment complex in the 1200 block of North Pearl Street for a vehicle theft in progress.

“The officer arrived and the (suspect) bailed out of the stolen car and ran,” police spokeswoman Wendy Haddow said. “The officer bailed out and chased him. But when he ran out, he didn’t lock the door.”

During the foot chase, the suspect doubled back and was able to jump in the officer’s SUV and drive away.

About 6 a.m., King County sheriff’s deputies notified Tacoma police that the patrol SUV had been involved in a collision at Military Road South and South 276th Court just south of Kent.

The suspect allegedly jumped out of the patrol car without putting it into park, and it rolled about a block before striking another vehicle. He then fled on foot.