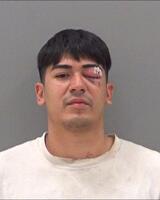 A San Angelo man is in custody on multiple charges after he evaded arrest in a stolen police car and crashed into a house, Wednesday morning, November 3, 2021.

According to San Angelo Police, officers were responding to a Domestic Disturbance call in the 600 block of Macann Street on Tuesday morning when the suspect, 24-year-old Michael Rodriguez, fled through the house and left through the back door.

An officer attempted to arrest Rodriguez, but was injured and Rodriguez was able to escape the scene by stealing an SAPD patrol unit.

Officers pursued Rodriguez into the 1500 block of Woodruff street where Rodriguez crashed the patrol unit into the side of a residence.

Rodriguez was taken into custody and transported to Shannon Medical Center with non-incapacitating injuries.

Upon his discharge from the hospital Wednesday morning, Rodriguez was charged with Violation of a bond/protective order, Evading arrest/detention with Serious Bodily Injury and in a Motor Vehicle, and various County Warrants. Additional charges may be forthcoming.