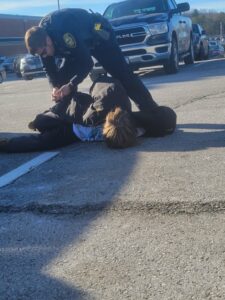 An Augusta police cruiser was stolen Saturday afternoon and then used during a confrontation at the parking lot at Shaw’s Plaza, according to officials.

Police said an Augusta officer was at the police station at 33 Union St. at about 1:30 p.m., taking a report in the lobby. When the officer went outside to return to the marked police cruiser, it was gone.

Officers responded to the Shaw’s Plaza parking lot, Lully said, located the cruiser and identified the sole occupant as Kyle King, 27, whom Lully described as transient from the Augusta area.

King was arrested and taken to Kennebec County Correctional Facility in Augusta, with his bail set at $300.

Police records indicate King was charged with theft by unauthorized use of property.

Before King was apprehended, he was apparently involved in an incident involving the police cruiser at the Shaw’s Plaza parking lot, which was preceded by a confrontation with a family inside the supermarket.

Adriana Jackson of Farmington said she, her husband, Chris Jackson, and their two daughters — one 4 years old, the other 18 months — came to Augusta to take part in Christmas activities and stopped at the Shaw’s supermarket. They then noticed a man seemed to be following them as they entered the store, and continued doing so once inside.

Adriana Jackson said she and her family did not think much of it, but noted she and her husband always watch their surroundings and children closely. She said the man, who she said in an interview later Saturday turned out to be King, got really close to the family, so Chris Jackson told him to move away.

Adriana Jackson said the man responded with some “creepy” talk, along the lines of her kids are a gift from God and to take care of them.

When Chris Jackson left the store, King followed him and the rest of the family outside, where they watched as King reportedly got into a police cruiser in the parking lot, according to Adriana Jackson.

Adriana Jackson wrote in a Facebook post, “The guy follows us out gets in a COP CAR that Augusta PD didn’t know was STOLEN, uses the lights and radio and follows me over to my car,” into which she jumped and locked the doors.

She said Augusta police, whom she said had been called by a Shaw’s employee, pulled up and, with guns drawn, pulled the suspect out of the police cruiser he had been driving and to the ground.

Adriana Jackson said after King was arrested, he told Chris Jackson he should have killed him. Police told Adriana Jackson that King had a knife with him.

Jackson said police at the scene told the family they did not know the car was gone, and that it was being used by an on-duty officer.

She expressed concern the suspect, who the family did not know, might have had access to weapons inside the police cruiser.

After King was arrested, Jackson said she “lost it on the cops” for not knowing where their car and weapons were, because “he could have killed us, and who knows what he wanted to do.”

She described the experience with King as the scariest thing that has happened to her, adding the incident will worry her forever.

Lully declined Sunday morning to disclose the name of the officer whose cruiser was allegedly stolen. Lully would also not say whether the keys were left inside the cruiser or if doing so is standard practice within the Augusta Police Department.

“Mr. King’s actions, as well as the officer involved, are all still under investigation,” Lully said in response to questions about the incident, how the cruiser could be taken and if weapons were inside the cruiser and accessible to the person who had taken the vehicle.