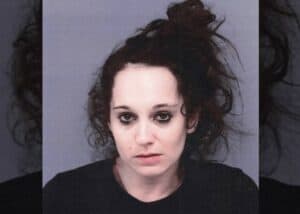 A Pennsylvania woman who was taken into custody on an arrest warrant is accused of trying to escape by stealing a police vehicle and dragging behind a probation officer, according to authorities.

Police said they were in the 1000 block of Main Street in Dickson City to assist with an arrest warrant. An officer handcuffed Amanda Desando, 31, and placed her in the back seat of a police unit while a search of the residence was conducted.

While it is not entirely clear where police personnel were located, one officer was watching the residence while it was being cleared, according to the criminal complaint, PAhomepage reported.

Suddenly, police heard a probation officer yelling on the radio. After hearing the alarming broadcast, they saw her being dragged by the police car while it was traveling in reverse.

Officers issued several warnings before the vehicle finally came to a halt after getting “stuck in the trees and mud,” according to the news outlet.

All the while, Desando remained handcuffed in the rear of the police unit, although officers discovered the cage divider was slid open when they secured the situation.

Consequently, the woman faces several charges, which include trying to escape, unauthorized use of automobiles, criminal mischief, flight to avoid apprehension, recklessly endangering another person and theft.