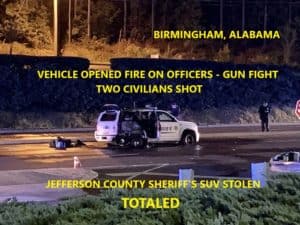 More than 100 law enforcement vehicles were involved in an early-morning chase through multiple cities Sunday after a man fired shots at Birmingham police, shot and wounded two citizens in a passing vehicle and then stole a Jefferson County Sheriff’s Office SUV.

The ordeal began shortly before 1 a.m. when an East Precinct officer was stopped at a traffic light in the 9400 of Parkway East. Birmingham police spokesman Officer Truman Fitzgerald said a vehicle pulled up next to the officer and opened fire.

The suspect discharged several rounds into the patrol vehicle, but the officer was not injured. An East Precinct officer observed the suspect’s vehicle and a pursuit ensued. A police bulletin calling for all possible assistance was issued.

During the initial pursuit, the suspect began firing shots at the officers involved in the pursuit. The pursuit ended in the 1200 block of Arkadelphia Road when the suspect’s vehicle became disabled, Fitzgerald said.

The suspect then became involved in a short standoff in the roadway of 1200 Arkadelphia Road. During the standoff, the suspect gained control of a Jefferson County Sheriff’s Office’ patrol vehicle.

The suspect then fled in the JCSO vehicle. The pursuit traveled through multiple jurisdictions including Birmingham, Vestavia, and Hoover. The suspect’s vehicle was disabled in the 2800 block of John Hawkins Parkway in front of Academy Sports.

The stolen sheriff’s SUV caught fire after running over spike strips and the suspect was then taken into custody. The suspect sustained minor injuries and was transported to the hospital for evaluation. Fitzgerald said officers did discharge their firearms during the incident.