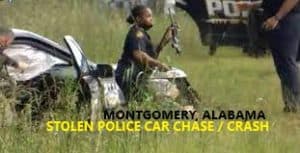 The Montgomery Police Department has identified the suspect who was taken into custody after allegedly stealing one of the department’s police units and leading law enforcement on a multi-county chase.

Brandon Bazzell, 36, is now charged with first and second-degree theft of property, as well as third-degree escape.

Montgomery police spokeswoman Capt. Saba Coleman said the incident started when officers responded to a suspicious person call in the 3900 block of Marie Cook Drive around 1:15 p.m. Officers on the scene detained Bazzell, but he was somehow able to then steal the patrol vehicle and flee the scene.

Coleman said police tried to stop the stolen police vehicle but Bazzell refused to stop and a chase ensued.

The chase continued on Interstate 65 north until near mile marker 189, just past Autauga County Road 40 in Pine Level, before the suspect crashed into a ditch.

Bazzell was taken into custody and transported to the Montgomery County Detention Facility. Information on bond was not immediately available as the investigation continues.