10/21/20 Marquette County, MI – Sheriff Thought It Was A Joke When His Locked Marked Pick Up Was Taken – Patrol Truck Found Damaged In A Ditch – Suspect Later Found – Admits Stealing And Damaging It – Captured 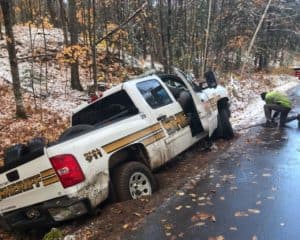 A sheriff in Michigan’s Upper Peninsula must have been asking himself that when he was unable to find his marked patrol vehicle after a radio interview and assumed his deputies were playing a joke on him.

However, there was no joke. The Chevy Silverado belonging to Marquette County Sheriff Greg Zyburt was in fact missing.

“You can’t make this stuff up,” department staff wrote on Facebook on Wednesday, Oct. 21.

Zyburt checked his keys and found them on his belt and quickly called a lieutenant asking where they had moved his vehicle, assuming it was a joke.

The lieutenant denied any involvement but told him dispatch had reported a marked police vehicle in the ditch on Forestville Road. Upon arriving at the location, tracking K-9 Deja located a suspect in a nearby restroom at the Forestville boat launch.

The suspect was taken into custody and charged with unlawfully driving away an automobile. The suspect admitted to finding an extra set of keys inside the truck, police said. It is unknown how the suspect gained entrance to the locked vehicle.

Regardless, the department is using the bizarre incident as a teaching moment for residents in the Upper Peninsula.