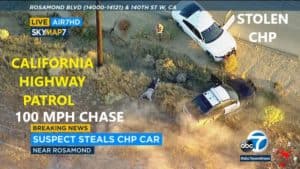 The CHP and Sheriff’s Deputies chased a suspect Wednesday evening in one of the wildest and craziest chases the Southland has seen in years.

The suspect commandeered a police vehicle following a carjacking of a pickup truck driver that was captured on video.

The original want had law enforcement believing the man was in a stolen Optima. He had a female passenger with him.

After they crashed his carjacked pickup, he left the woman behind and ran — he came across an unoccupied  CHP cruiser, jumped in and stole it.

The suspect was also believed to be driving under the influence.

While driving through remote areas of Lancaster, Palmdale and Tehachapi, the suspect drove off road. When he was with the female suspect the two crashed their pickup off-road and kicked up a cloud of dust. The passenger side airbag deployed.

When the suspect got out of the truck, he went over to the female passenger, gave her a hug and left. She apparently sustained injuries of some kind. Still, the woman was able to elude law enforcement and remained at large, the CHP said. The female passenger was eventually found and taken into custody.

The male driver  is facing a myriad of felony and misdemeanor charges including theft of a police vehicle, carjacking, assault, speeding, reckless driving, and evading, to name a few.

The chase ended in Rosamond after about an hour, when the suspect was unable to get the stolen police car over a curb and began to spin out when the tires hit a small ditch.

“This was definitely one for the ages,” Mundel said.

Wednesday evening, CBS2/KCAL9’s Rachel Kim reported the entire episode began with CHP getting reports by the Sheriff’s Department that they were in pursuit of a suspect who assaulted a deputy.

No assault was confirmed.

The pursuit started near Lancaster.  Deputies attempted to stop the driver who they believed was armed.

Motorist Christopher Huth — in a pickup truck — was on his way home when the chase passed him.  An interview with Huth appears Only On 2.

Huth says he decided to pull over and watch it all play out. He thought he might be able to help authorities — he didn’t know he was about to become part of the story.

The suspect double backed, spotted the pickup and demanded Huth get out.

“So he races up, kinda blocks from where I’d been parked,” Huth says, “and he yelled out his window, ‘They’re trying to kill me.’ Those words just got out of his mouth and he was out of his car with a pistol held sideways right in my face. I pulled my car door open and I just [puts my hands up and said] take the truck. Got out.”

The suspect and his female passenger — now in the truck — kept evading police at high speeds.

After crashing and ditching his passenger, he fled on foot, double-backed and then jumped into a CHP car and drove off.

The chase ended when he drove the CHP cruiser into a ditch.

“He seemed crazed,” says Huth, “That’s the word I would use. Just crazed. His eyes were huge and bloodshot and the gun. The lady looked scared.”

The suspect has been identified as 29-year-old Jose Galvez. The woman was not identified and she was hiding in the desert for hours before being taken into custody around 9 p.m., Kim reported.