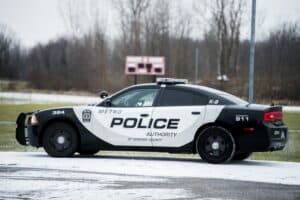 Metro Police Lt. Michael Murphy said officers were called to the 4000 block of Market Place in Flint Township following the report of a larceny in progress.

When officers arrived, a male suspect drove off in a vehicle. Metro Police officers pursued the vehicle, which crashed in a UPS parking lot in Flint Township. After the crash, the driver bailed and ran from the vehicle.

An officer chased the suspect before the unidentified man was able to get around the officer and into the driver’s seat of the police cruiser. The suspect drove the vehicle through a fence in order to flee the police.