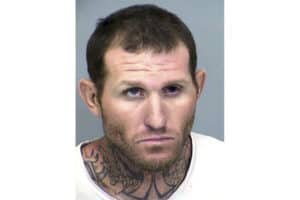 A man suspected of attacking and severely injuring a Maricopa County Sheriff’s deputy during an escape this morning is in critical condition after exchanging gunfire with a homeowner in Tonopah this evening.

Multiple police agencies spent the afternoon looking for 30-year-old Clinton Robert Hurley after MCSO officials say he attacked a deputy who was processing him in Avondale Saturday morning. It happened at the MCSO District 2 building just before 11 a.m. near Dysart Road and Van Buren Street.

Maricopa County Sheriff Paul Penzone says the injured deputy was with Hurley at the MCSO station. Hurley was in custody for previous warrants. A short time later, another deputy found his colleague unconscious and bleeding from the face. Investigators say Hurley took off in the deputy’s Tahoe crashing through the gate of the facility and leaving the injured deputy at the scene. Investigators say Hurley left the stolen Tahoe and stole a car from another driver in a carjacking incident. The injured deputy was taken to a hospital where he remains in critical condition.

Later in the day, MCSO officials say their deputies were called around 6:30 p.m. to a home in Tonopah after a reported shooting. According to Penzone, the homeowner and Hurley exchanged gunfire at the home. Police say there was history of conflict between the the two, but did not elaborate on their relationship. Police located Hurley near the scene. He had been shot and was taken to the hospital in critical condition.

The injured deputy, a three-year veteran, is currently on life support.