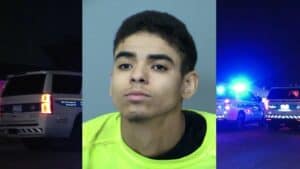 A man has been arrested after allegedly breaking into a Phoenix police patrol car and driving off with it early Saturday morning, police say.

Phoenix police were investigating an aggravated assault report near N. 35th Ave., just off U.S. 60. A man unrelated to the assault apparently broke a window of the officer’s patrol car, drove away in the vehicle and dumped a patrol rifle out of the vehicle at some point, police say. He was later identified as 20-year-old Isaiah Orozco.

Officers soon spotted Orozco and arrested him. Later, investigators recovered the patrol rifle that had been dumped. Orozco faces various charges, including theft of a means of transportation, 3rd degree burglary, and first degree of stolen traffic property. Phoenix police are still investigating, and there are no further details available.