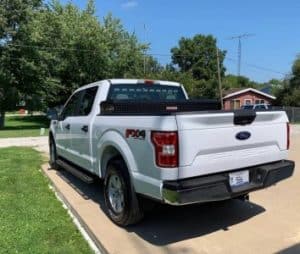 The suspects was taken into custody by Joplin Police and later transferred to the Newton County jail.

From Oklahoma Highway Patrol: It started just before 5:30 p.m. when an OHP trooper was in pursuit of a black Dodge Charger with a paper tag on the Will Rogers Turnpike eastbound between Vinita and Afton. The suspect vehicle struck stop sticks that had been set up near the Miami gate. The suspect’s tire deflated and he exited the vehicle and fled on foot. Troopers pursued and at some point in time, the suspect stole an OHP unit and continued eastbound on the turnpike.

After the suspect was taken into custody, it was discovered that an Oklahoma Highway Patrol trooper had been struck as well. He was exiting his unit to apprehend the suspect and was accidentally struck by a Missouri Highway Patrol unit. The OHP trooper was also transported to the hospital with unknown injuries.

Illinois State Police said they are helping the Pleasant Plains Police Department with a case involving a stolen police vehicle.

In a news release, troopers said a Pleasant Plains police vehicle was taken around 11:15 p.m. on Sunday during an incident. State Police are looking into leads to try to find the vehicle.

If you have any information regarding the vehicle’s whereabouts, call ISP Zone 4 Investigations at (217) 782-4750.