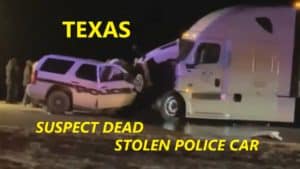 An Abilene man has died in a head-on crash after leading police on a chase and stealing a patrol car.

John Nichols, from Abilene, was pronounced dead after leading the police on a chase and hitting a semi-truck.

According to Haskell County Sheriff David Halliburton, the suspect was contacted around 10:30 p.m., on Monday. He was contacted to investigate possible criminal activity since he was parked outside of the gate.

Nichols was being elusive and was asked to step out of the car. He then took off and got on Highway 277.

Eventually, Nichols was stopped. While officers were trying to arrest him, he got away and jumped into a Haskell police car. Officers shot at the car, however, it is unknown if Nichols was hit.

He began driving south in the northbound lane, traveling for about two miles. He then collided head-on with a semi-truck.

The semi-truck driver was not injured, however, the suspect was pronounced dead at the scene.