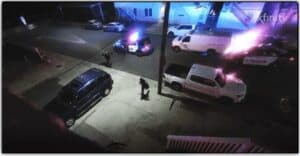 A Camden County man is accused of stealing an Atlantic City police transport van and ramming two patrol cars shortly after he was released from police custody on attempted burglary of a police car.

Video captured by a resident’s surveillance camera shows officers running from their vehicles as the van backed up into the patrol cars as the driver was cornered on North Iowa Avenue.

A concerned citizen first alerted police at about 7:20 p.m. Friday that a man was trying to steal a marked patrol vehicle parked on Atlantic Avenue, Sgt. Paul Aristizabal said.

Officers William Akins and Jarae Langford, who were at the Public Safety Building, saw the man trying to open the locked driver’s side door to the patrol vehicle, and confronted him, according to the report.

Jason Urbaniak admitted that he was trying to steal the vehicle, and was arrested without incident, Aristizabal said.

He was processed on attempted burglary charges and released on a summons at about 10:50 p.m., according to the report.

Urbaniak, 40, then went into the parked Police Department prisoner van, manipulated the ignition to start it and took off, Aristizabal said.

Police communications was immediately notified of the stolen van.

Additional responding officers arrived on scene and pulled behind the van, when Urbaniak put it into reverse, accelerating into two marked patrol vehicles, Aristizabal said.

Officer Consuelo Maldonado suffered a minor injury as a result and was taken to AtlantiCare Regional Medical Center’s City Campus, where she was treated and released.

Officers are seen in surveillance video running from their vehicles as the van heads toward them.

At least one pulled their firearm. Urbaniak was taken into custody without further incident.

Urbaniak is in the Atlantic County Justice Facility.

An investigation into how he was able to start the van is underway.