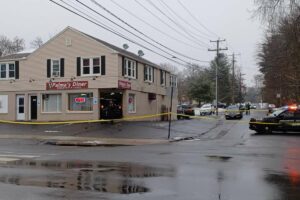 A carjacking suspect stole a police car and crashed into a local diner on Thursday, Bristol police said.

Police later identified the suspect as Jimmie Shoemaker-Gonzalez, 39. Shoemaker-Gonzalez was charged with first-degree larceny and held on $1 million bond, police said. No photographs of him were immediately available.

Farmington Police Lt. Matthew S. Corcoran said the series of events began when officers were investigating a car crash that “led to a reported armed carjacking in Farmington.”

Officers in Farmington were called to Scott Swamp Road, or Route 6, near the Bristol town line at 12:07 p.m. for a motor vehicle complaint involving a Dodge Durango. While officers were en route, they saw the Dodge crash into a rock wall at the entrance of an apartment complex near Brookshire Lane, Corcoran said.

Police later determined the Dodge had been stolen, according to Corcoran.

The suspect, who was alone, fled the Dodge and tried to steal two cars at knifepoint from the complex, Corcoran said. Corcoran said a 27-year-old Farmington man suffered minor injuries during the incident and was taken to Bristol Hospital.

The suspect succeeded in his third attempt to steal a vehicle and fled the Farmington complex in a 2019 Toyota RAV4 and headed toward Bristol, Corcoran said.

Bristol Deputy Police Chief Matthew Moskowitz said his officers were investigating the carjacking around 12:15 p.m. when the suspect, who was not immediately identified, stole one of the department’s vehicles.

Police chased the suspect until the driver crashed into Palma’s Diner on Stafford Avenue in Bristol, according to Moskowitz.

“This investigation is rapidly unfolding,” Moskowitz said. “There is no threat to the public at this time as the suspect is in custody.”

Shoemaker-Gonzalez was arrested at the scene, according to police. He is scheduled to be arraigned at state Superior Court in New Britain, police said.

Several officers were stationed behind Jerome Avenue where crime scene tape had been set up. The Connecticut State Police Major Crime Squad vehicle was parked next door in the lot for the Bristol Housing Authority.

Next to the diner at Max Pizza, one employee said they did not hear the crash.

“I didn’t hear one thing,” the employee said. “We didn’t hear the car crashing. One of the customers was leaving and said, ‘I don’t think I’m going anywhere, there’s something going on,’ and we saw there are police cars everywhere.”

Patrons inside the restaurant did not want to speak about the incident, but noted the diner was “constantly packed.”

“I couldn’t believe what happened, I had to come see,” said Alex Koutouvides, one of the owners of Max Pizza. “I can’t believe someone would steal a police cruiser.”

He said business was slow after the crash, but local customers were still coming in the back way.

“There’s always something happening in Bristol,” he said.