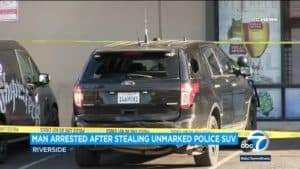 Gunfire was exchanged after the suspect gained control of the Corona police SUV following the crash around 2 p.m. Saturday on westbound State Route 91 near Van Buren Boulevard.

No injuries were reported in the shootout.

The suspect left his crumpled car, which was involved in the earlier collision, behind as he drove away in the SUV, said Riverside Police Officer Ryan Railsback.

Railsback said it was unclear if the police vehicle was involved in the crash.

Officers later found the suspect, who has not been identified, in an apartment complex in the La Sierra neighborhood in Riverside, near La Sierra and Minnier avenues, where he barricaded himself before eventually surrendering, according to authorities.

Railsback said the man was arrested and there are no other outstanding suspects.

The suspect was taken to a hospital for treatment of unspecified injuries.

The unmarked patrol car was found in a strip mall parking lot, and a photo from the scene shows an abandoned white pickup in the middle of the freeway.

All westbound lanes of Route 91 were shut down between Adams and Van Buren boulevards during the investigation, causing a miles-long backup.