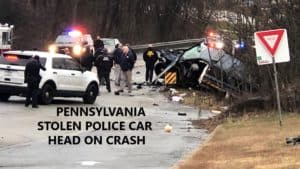 The crash happened at about 2:30 p.m. on Conchester Highway near Cherry Tree Road, authorities say.

The road was closed in both directions following the crash.

Chopper 6 showed severe damage to both vehicles, but information about injuries was not immediately available.

“It was weird. It was crazy,” said Brey Dalton, who works at the Exxon on 2400 block of Market Street and witnessed the crash.

Police say they were responding to a report of disorderly conduct.

Upper Chichester police say Patrol Sgt. Ken Massey saw the suspect try and pull a woman out of a car at the gas station.

Officials say a tussle ensued. Sgt. Massey tried to deploy his taser, but the suspect was too close.

The suspect managed to evade the officer and jumped into the police SUV. Dalton explained what he saw next.

“Next thing I know, I see the cop car shoot across, and smack into a truck that was coming into the lot. He went around the truck and took off,” said Dalton. “I’m thinking, a cop actually hit someone and pulled off.”

Police say the driver of that truck tried to stop the suspect but to no avail.

Investigators say the suspect then fled at a high rate of speed down Market Street, then westbound on 322, where he collided with another vehicle after police say he crossed the median.

Ryan Shomo, who also witnessed the incident, works near the crash site.

“Probably the worst car wreck I’ve ever seen. The car is mangled,” said Shomo. “You can’t tell the front from the back.”

The officer was treated then released from a local hospital, officials say. A 47-year-old woman who traveled in the other vehicle involved in the crash is in serious condition, officials say.

The suspect remains hospitalized in critical condition. Police are not releasing his name at this time. He faces a slew of possible charges, including aggravated assault and auto theft.

The investigation is still ongoing.