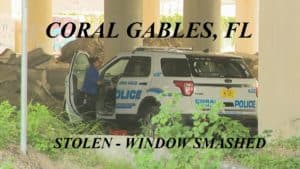 A Coral Gables police cruiser was stolen from an officer’s home and found abandoned Monday morning in Miami.

A Miami police officer spotted the stolen SUV on Northwest 77th Street, under the Interstate 95 overpass.

It appeared the thief dumped the vehicle after taking it for a joyride and rummaging through it. The back window of the SUV was smashed.

When crime scene technicians opened the back hatch, it appeared there was a black metal compartment of some kind that had been forced open.

Coral Gables police said no weapons were stolen from the officer’s cruiser as the officer had removed all weapons and body armor from the vehicle before turning in for the night.

Crime scene technicians dusted the SUV for fingerprints before police loaded it onto the back of a flatbed truck to be towed away.