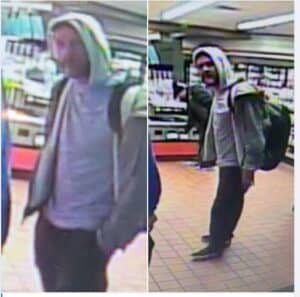 Police surrounded a home in Clinton County, Illinois after an extensive search for the man wanted for killing an Illinois officer this morning. The suspect has been arrested.

WEHT-TV reports that Wayne County Sheriff’s Deputy Sean Riley was shot and killed on the job on I-64 at around 5:00 am near Mill Shoals, Illinois Wednesday morning. The Deputy’s squad car was missing from the scene and then found abandoned on Interstate 64.

A man was shot in the shoulder and carjacked at a St. Peters QuikTrip at around 7:00 am Wednesday morning. St. Peters police say that they found evidence at the QuikTrip that connects the suspect to the death of an Illinois officer. It is not clear how the suspect got to the St. Peters area but they were investigating a semi-truck in the gas station’s parking lot.

The search for the suspect started in Missouri and then led to several locations in Illinois. People were warned to lock their doors and police released an image of another vehicle connected to the suspect.

Police surrounded a home in Carlyle, Illinois Wednesday afternoon. They eventually arrested the suspect wanted for this crime.

The suspect is described as a white man, last seen wearing a light gray hoodie, backpack, and black shoes. His vehicle was found unoccupied in O’Fallon, Missouri. He was considered armed and dangerous.

A Facebook post from the St. Peters Police Department said a man carjacked was shot and carjacked at the QuikTrip on Main Street in St. Peters at around 7:00 am. The suspect took the victim’s Chevy Cruze this morning and then fled the area. Police said the victim is in stable condition at the hospital with non-life-threatening injuries.

Searching for the suspect in Illinois

The Highland-Pierron Fire Department in Illinois was warning people to lock their doors.

Police in Clinton County, Illinois were warning people who live in communities near Breese, Illinois to be on the lookout a man they considered to be armed and dangerous. They shared images of the suspect’s vehicle. They were asking people to lock their homes and not respond to strangers.

Police initially said that there were two suspects. One of the men was misidentified and was a victim.

Police surrounded a home in Clinton County, Illinois at around 1:00 pm. There was a massive police presence in the area with officers’ vehicles lining the rural roads. Police were eventually able to arrest the suspect.